A group of prominent local and international researchers and scholars gathered under the umbrella of the Institute for Applied Research of the Galilee Society, in an international scientific conference that took place in Golden Crown Hotel, to discuss innovative methods to be applied in the field to exclude nitrogen compounds in modern, inexpensive and sustainable ways. 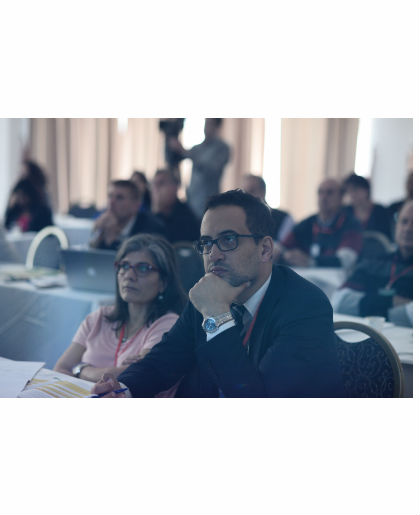 This conference is considered as a qualitative leap for the Institute of Applied Research in the Galilee Society at the local and global level and in terms of addressing global problems that are not limited to a region or country, which demonstrates the determination of the Galilee Society to be attract scholar from different parts of the world to deal with significant scientific issues and lead in the field.

It was a two day conference that focused on nitrogen transformations and presented through various scientific research and lectures related to nitrogenous compounds in various fields, in terms of working on removing toxic compounds in wastewater and agricultural soil. The lectures also addressed the challenges facing engineers and scientists in this matter. The second day included the opening of the AgRobics project, which is led by the Applied Research Institute of the Galilee Society, in cooperation with Mekorot company and is about wastewater treatment in Karmiel. This opening is part of a huge project funded by the European Union, in which 25 partners from Europe, including AgRobics and Mekorot, alongside SMART-Plant.

It is worth noting that the AgRobics technology in Karmiel joins a series of technologies and innovations of the joint project (SMART-Plant) aimed at promoting the principle of sustainability and recovering resources such as biogas, organic materials, fertilizers and more.

The conference included academic-industrial cooperation, represented by the promising AgRobics Company of the Galilee Society, in cooperation with the country’s leading water company, Mekorot, and ETP Engineering Company.